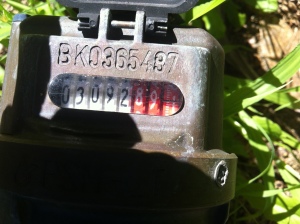 I am very lucky to have three lovely housemates in Victoria Park. However, I am not so lucky with the landlord. Interestingly, it was the same a year ago in Hamilton Hill. In my rental experience for the last 7-8 years since I have been in Australia, and it seems like there is some sort of a pattern.

At my current address, we have just paid another huge water bill for the last six months. Now, 1300 litres of average consumption per day may not seem like a lot to some households, but for a house, which is vacant for 80 % of the time, where hardly anybody cooks and the occupants are using the very basic water needs one have – is a lot. It is even more alarming to somebody, who just graduated with a PhD in sustainability. So, for me, and for all of us in the house it was clear that the reason for the unusually high water bill was the heavily leaking shower and a tap. It has been like this since I moved in – about a year ago – and on my initial request, as well as all the consequence ones, the answer from the landlord was that it was due to “usage”, and not due to the plumbing itself. That never made sense, as none of us had any interest in keeping the water running while not using it. It was clearly an excuse not to have to repair and maintain the property at an additional coast.

So, we took initiatives in our own hands and called a plumber to have a look at the leaking shower ad tap. He tried his best to fix the problem, by providing a quick fix and replacing the rubber ring on the tap, but only for the same problems to occur in less than a week. This happened several times. It seemed like everybody got used to it until we received the next bill, which accounted for over $500.

After failing to negotiate with the owner, I decided to call the Water Corporation and to ask what my options are. They were very helpful and even sent us materials on how to save and monitor our water usage. It was then, when I also became aware that the service charges for the water supply to the house (currently about 33 % of the total water bill) should be beared by the owner, not the tenants – something that we have been paying all along. The next step was to call a different licensed plumber to provide a quote and to assess the situation: what a shock it was to also find out that the hot water system has been also leaking and that its protective cover has been inadequately fitted hanging on a single bolt next to a wooden frame tag, which would be ideal to catch up o fire if an accident occurred. So, it wasn’t just ignorant, wasteful, expensive and annoying – it was also dangerous. Yet, the owner’s assessment of the situation was” there is nothing wrong with a leaking water system”.

Thankfully, as a friend, the plumbers provided free of charge service to fix the outside leakage and promised to come in the weekend to replace the shower head, shower and tap. I can only hope that it will not be on our own expenses (if I could have my say).

We now monitor water usage on a daily basis and it is very easy to see how quickly and how expensive a leaking shower can account for.

It is clearly the responsibility of the owner to fix a leaking tap, so why is it so hard – close to impossible – to do so? Do things need to get dangerous before somebody did something? The last words I heard from the owner were “There is nothing wrong with a leaking hot water system.”

Well, I seem to disagree slightly.